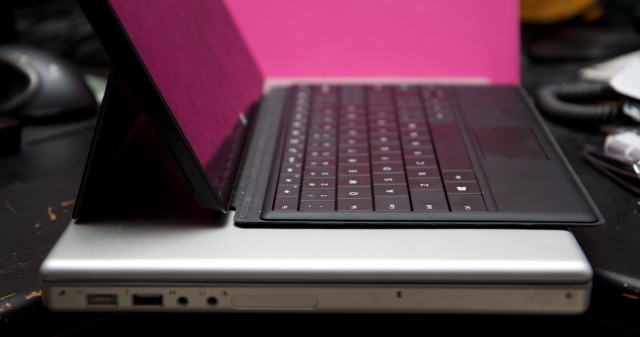 Surface Pro manages to be substantially smaller than my MacBook Pro, and yet it occupies even more space on my lap. Now think about the implications that has for cramming this thing on the tray table of your cattle-class flight. – Peter Bright – Ars Technica

There are a lot of Surface Pro reviews coming in and they seem more harsh than the RT model’s reviews (probably because we thought the Pro would be our Savior from the RT). If there’s a ray of light in all the Surface Pro reviews, it’s that we’re discovering just how important the clamshell adjustable hinge is – and why there’s so much demand for iPad keyboards that emulate it. I think Logitech actually has the solution to the “problem” Microsoft was trying to solve – we want to use our tablets as tablets, but a real keyboard is nice to have for some serious typing, especially symbol-laden code or scripts (I do a lot of webserver admin on my iPads with Diet Coda and Textastic – recommend both!). Logitech’s idea here is to similarly make the keyboard the cover using the smartcover magnets which lets you effortlessly get rid of it when it’s Angry Birds time, but unlike the Surface, instead of using a kickstand, you detach the iPad from the hinge, and place it into a notch that holds it in a hopefully ideal angle – solving the “more space than my MacBook Pro” problem.

The picture links to the Mini keyboard from logitech which also looks like it has a clever way of not making keys too small – it keeps all of the alpha keys the same size as their big-iPad keyboard and squashes everything else even more. It might take a day or two to get used to, but it’s probably easier than typing all the nonsense you have to go through to type <?PHP $string="&amp;"; ?> on the software keyboard, even in Diet Coda and Textastic which try their best to help by adding these keys to an extra row above the qwerty row.

I bought the original iPad keyboard dock and never used it because it wasn’t portable and was only portrait, and I do occasionally use the Apple BT keyboard if I’m planning and taking the iPad somewhere specifically to type something, but so far I’ve found the 11″ Air or dual-thumb-portrait typing to be the superior experience. I will give the Logitech Mini a try when it ships.